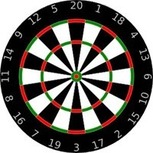 A bit about "The Undertaker" Nigel Heydon.

After a string of brilliant results on the players championship tour, this qualification to the tv stage is thoroughly deserved.

The added beauty of the grand slam event is it's a guaranteed 3 matches minimum of tv experience and exposure.

Nige loves being on the main stage and will no doubt thrive in the limelight and the top boys have known for a while he's one to beware of and will only get better with every tv event as he adjusts to the bright lights and surroundings.

Having already secured a place in the PDC World Championship 2012 this will be the perfect build up.

Nigel made his tv debut at the World Championship @ Ally Pally last year where he played Robert Thornton in the first round. He never got going until he was 2-0 sets down and missed doubles to make it 2-2 sets all before eventually losing 3-1. That experience alone whetted his appetite for more tv appearances as his hunger and desire to succeed drove him on.

After a brilliant year, Nige currently sits 35th in the pdc players championship order of merit table. His form has been outstanding and with 2 remaining players champs, this weekend, a top 32 place would earn him another tv date in Doncaster, early December.

He's relentless on the treble 20's, be it down the local pub with his mates, in matches and/or in exhibitions. His rise up the rankings has been nothing short of sensational! He might be an undertaker, but he has a heart of gold as all his exhibitions are played for charity.

This is your chance to shine!!! Leamington salutes you! Well done Nige!!!