He was also part of Sir Alf Ramsey's England squad for the 1966 World Cup and went on to win 28 caps in total.

"Keep battling Norman, we are all with you," a Leeds statement said.

"We would like to take this opportunity to remind the public and the media to respect the wishes of Norman and his family and to give them the space they need during this difficult time."

Hunter's reputation as a fearsome tackler was borne out by his nickname 'Bites yer legs'.

He formed a strong partnership with Jack Charlton at the back for Leeds, also adding European silverware in the Inter-Cities Fairs Cup, an FA Cup and a League Cup to his and the club's haul.

Only three Leeds players - Charlton, Billy Bremner and Paul Reaney - have made more appearances for the club.

Hunter also played for Bristol City and Barnsley, and then managed the Tykes along with Rotherham United.+


This bloody virus has no respect for reputations

Ex-England defender Norman Hunter is being treated in hospital after testing positive for coronavirus, his former club Leeds United have confirmed.Hunter, 76, played 726 games in 15 years at Elland Road, won two league titles and played in the 1975 E

Doesn't your memory play tricks on you

Watch Billy Bremner sprint over to get involved at the end ...it's some entrance to the fight

And some player
If you need a laugh watch the youtube clip of Norman v Franny again Watch Billy Bremner sprint over to get involved at the end ...it's some entrance to the fight Absolute headbanger And some player

The tough-tackling centre-back, nicknamed 'Bites Yer Legs', was a key player in Leeds' most successful era.

He won two league titles during a 14-year first-team career at Elland Road, and was a non-playing member of England's 1966 World Cup-winning squad.

Hunter was admitted to hospital on 10 April after testing positive for coronavirus.

Leeds said Hunter's death leaves "a huge hole" in the family of the club.

"His legacy will never be forgotten and our thoughts are with Norman's family and friends at this very difficult time," the club said in a statement.

iconic player in 70s one of the best from that era and leeds through and through , proper legend from a time it wasnt about money or sponsors it was for the shirt

RIP
sad day for football iconic player in 70s one of the best from that era and leeds through and through , proper legend from a time it wasnt about money or sponsors it was for the shirt RIP 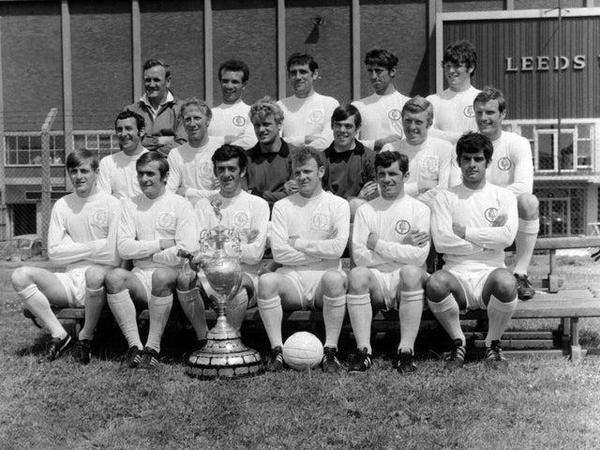 Report kenny mann • April 17, 2020 12:29 PM BST
I can name all the players in that photo, massive Leeds fan circa 64-55 and only missed a dozen or so home games and was at Liverpool that incredible night in 69 when we stood firm for a 0-0 and clinched the championship. 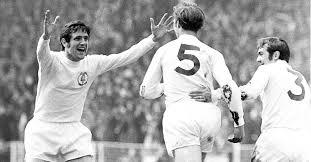 Report stewarts rise • April 17, 2020 1:58 PM BST
Thats Chelseas Cat, peter Bonnetti and Norman bites yer legs Hunter gone within a few days of each other, both generally kept out of the England team by 2 of the all time greats in Banks and Moore.
yoy can see the full 1970 FA cup final replay on.
https://www.youtube.com/watch?v=FIvpVPXf1k4

Great for anyone whose never seen it, what a wonderful full bloodied game it was, you can watch highlights of the 1st match at Wembley before just to get a taste of these 2 fantastic teams.
Thats Chelseas Cat, peter Bonnetti and Norman bites yer legs Hunter gone within a few days of each other, both generally kept out of the England team by 2 of the all time greats in Banks and Moore.yoy can see the full 1970 FA cup final replay on.http

Frannie Lee ( the short armed chimp) misses every punch ...."A" for effort though

The slogan on the banner - "Norman Bites Yer Legs" - became synonymous with one of the toughest, most uncompromising defenders of the post-war era.

But this actually did a disservice to a truly outstanding footballer who was known for his steel... but who could also produce silk.

The epitome of Revie's philosophy
Gateshead-born Hunter moved to Elland Road when he was 15, forsaking a career as an electrical fitter. He made his debut in 1962, establishing a formidable central defensive partnership with Jack Charlton and going on to play 726 games in 15 years at the club. Only three men played more matches for Leeds United - Charlton, Billy Bremner and Paul Reaney.

It was at Elland Road where Hunter wrote his name into legend, a man who epitomised the style and philosophy of Revie's team that won so many plaudits but also attracted fierce criticism for their ruthless, physical approach.

Nothing, however, must detract from the stature of a man who was so highly regarded and respected by his peers that he was named the first winner of the Professional Footballers' Association Player of the Year award in 1974.

Off the field, Hunter was a smiling, friendly personality. He was hugely popular with all he met, enjoying a long career as an astute analyst and summariser on Leeds games for BBC local radio.

He was also part of a group of hard men who populated the game in the 1960s, along with the likes of Liverpool's "Anfield Iron" Tommy Smith and Chelsea captain Ron "Chopper" Harris.

When he sustained an injury at Leeds, Revie's veteran right-hand man Les Cocker was informed "Hunter has broken a leg". The coach allegedly replied: "Whose is it?"

The "Norman Bites Yer Legs" tag stuck after Brian Clough, later to manage Hunter for an ill-fated 44 days at Leeds, referenced it in his 1972 FA Cup final analysis.

Hunter was as tough as teak, and one of the most enduring images is his full-on fist fight with Derby County's Francis Lee that saw both sent off at the Baseball Ground in November 1975.

But he was also a defender of the highest calibre and was perfectly at home in the top flight, as well as the more nuanced surroundings in Europe.

Revie's Leeds should have actually won more trophies than they did but were dogged by misfortune. One such occasion saw Hunter sent off when his frustration boiled over in the closing seconds of the 1-0 defeat by AC Milan in the 1973 Cup Winners' Cup final.

It came after a series of highly questionable decisions by Greek referee Christos Michas and fans inside the stadium in Thessaloniki threw missiles during Milan's lap of honour in protest.

Michas was later banned for life from refereeing and in 2009 Richard Corbett, then an MEP for Yorkshire and Humber, even lobbied Uefa to have the result reversed.

Leeds felt similarly aggrieved when they lost to Bayern Munich in the European Cup final in Paris two years later, most notably when Peter Lorimer's magnificent volley was ruled out for offside with the score 0-0. Bayern went on to win 2-0.

The England understudy with so much more to give
Hunter was the permanent understudy to England's World Cup-winning captain Bobby Moore, limiting his career to a meagre 28 caps when so many more would have been collected in the modern era. But Moore was immovable in the early years and squad rotation was never considered.

Hunter made his England debut in a friendly win in Spain in December 1965, yet while he was a trusted member of Sir Alf Ramsey's 1966 World Cup squad, he did not play a game.

Only the 11 who played in the 4-2 win over West Germany in the final at Wembley received a medal, although Hunter finally got one after a successful campaign to have them awarded for all members of England's triumphant squad at a Downing Street ceremony in 2009.

Hunter was also in England's squad when they defended their crown in Mexico four years later, making one appearance as an 81st-minute substitute for Martin Peters against West Germany, which they lost 3-2 after extra time.

Sadly for Hunter, his England career is best remembered for an uncharacteristic mistake which led to their failure to qualify for the 1974 World Cup in Germany and Ramsey's subsequent sacking.

Hunter had been picked ahead of Moore, whose form had been indifferent and who had also made an error leading to a goal in England's 2-0 defeat in Poland.

In the return game at Wembley, England needed to win but were being thwarted by Poland goalkeeper Jan Tomaszewski - infamously labelled "a clown" by Clough.

In the second half, Hunter missed the sort of routine tackle he had completed thousands of times, allowing Grzegorz Lato to run clear and set up Jan Domarski for the goal that ultimately stopped England from qualifying.

There is a famous image of the inconsolable Hunter trudging from the Wembley turf, although it was a measure of Moore's personality that he was one of the first to drape an arm around him in an attempt to offer comfort.

Hunter's final England appearance came, fittingly, in Revie's first game as England manager in the 3-0 win over Czechoslovakia in October 1974.

Life after Leeds
Hunter left his beloved Leeds United for Bristol City in a £40,000 deal in October 1976, playing more than 100 games for the Robins in three years before a brief stint at Barnsley.

Hunter succeeded Allan Clarke as Barnsley manager in October 1980 and managed to guide them out of the former Third Division in the 1980-81 season, staying at Oakwell until February 1984.

He also had a spell in charge of Rotherham United and in recent years, Hunter has been contributing his expertise on radio, as well as a successful after-dinner speaker.

Hunter's enduring footballing image may be as the archetypal hard man but those who saw his career in the wider context will attest that he was an outstanding player, one of the finest defenders of his generation and a man who deservedly attained legendary status for his magnificent career at Leeds United.
Norman Hunter, who has died aged 76, was labelled indelibly by Leeds United fans during the 1972 FA Cup final victory over Arsenal at Wembley.The slogan on the banner - "Norman Bites Yer Legs" - became synonymous with one of the toughest, most uncomp