What tracks they going to be Covering

Who gives a fook if its HD or not

Someone saying no Derby coverage PMSFL

Report casemoney • January 14, 2021 8:42 PM GMT
All sis tracks so Tow Covered ? Dont know what the emailer was going on about

All sis tracks so Tow Covered ? Dont know what the emailer was going on about

Report go racing • January 14, 2021 10:21 PM GMT
Quite simple....SIS tracks only, no surprise as times have changed since the mugs in charge wouldn't let you watch a video. Only took them 10 years to realise that people bet and lose more if they can watch the action. 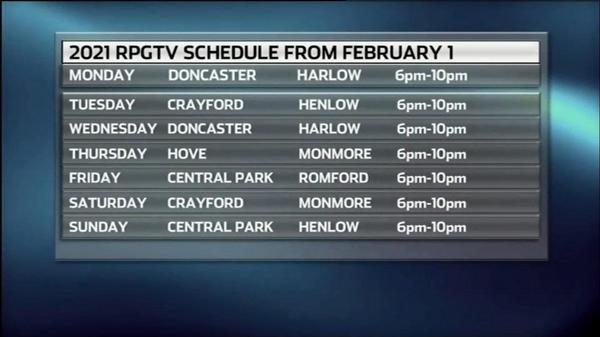 There is at least one important link between the two major announcements yesterday:

2) That ARC/TRP have lost the contract to supply live racing from their tracks to RPGTV, which has now gone to SIS.

How significant those links are, and their overall long term impact is very difficult to gauge.

Decisions will be taken as a result of incidents as they unfold, including the rolling back of Covid restrictions and a couple of other major developments that are in the pipeline.

So what can we piece together so far?

The first and obvious thought is a concern that ARC have reduced their greyhound commitment once more.

Within the last year they have seen three of their contracted tracks close.

They have been outbid for the Greyhound Derby, missed out on RPGTV and also lost the services of Nathan Corden, who was one of the limited number of high quality greyhound savvy administrators that they had on their books.

Yes, they staged two successful Derbys, and the industry is hugely appreciative of what they achieved last year.

The word on the streets though, was that without Rachel Corden’s drive to make it happen, the Derby would probably have been a Covid casualty.

ARC have become increasing reliant on the former Nottingham promoter though I wonder whether she is now quite isolated fighting the cause of greyhound racing – in a horseracentric business – following the loss in the last couple of years of her great allies John Gilburn and Clive Feltham.

Feltham might not have been everyone’s cup of tea, but he was certainly no mug. (clever stuff this)

ARC remain a leviathan with enormous resources though on the basis of the last couple of years, their long term commitment to greyhound racing must be under scrutiny.

So what will be different from Feb 1?

Cosmetically, the addition of high definition broadcasting is long overdue. However, at this stage, there is no reason to believe that the format of RPGTV, guests and presenters will change much. SIS might be supplying the product, but they don’t run the operation.

The schedule is still to be released, though we can have a guess what it will look like.

The two ARC tracks will be replaced by any two from three SIS tracks. On the basis of the current schedule, it will look like this.

MONDAY: OUT Nottingham Yarmouth – IN Doncaster Harlow or Youghal

TUESDAY: OUT Sheffield, Newcastle – IN Henlow, Crayford or Tralee

WEDNESDAY: OUT Sunderland, Yarmouth – IN Doncaster, Harlow or Youghal

THURSDAY: OUT Newcastle, Perry Barr – IN Hove, Monmore or Limerick

FRIDAY: OUT Nottingham – REMAIN Romford, plus Monmore or Cork

SATURDAY: OUT Sheffield – REMAIN Crayford plus one other

However – this could change dramatically with SIS asking tracks to move meetings. For example, I think it is a pretty good bet that Romford will be joined by Towcester on Friday nights.

Overall there is – I am told – limited appetite for Irish racing among UK bookies. Although it is incorporated for the betting shop service, it is cheaper than UK racing, there are no additional benefits in including it as part of the RPGTV schedule.

There is a possibility that some ARC tracks could appear on the Sky Racing Channel, but feedback so far has been very luke warm ‘squeezing in a race, with no preview, between American horse racing’.

There is also talk that the current RPGTV will merge into a new ’24 hour’ betting channel.

Repercussions of the changes

For the ARC tracks dropping off the service, there should be minimal obvious financial hardship, at least in the short term.

All tracks will continue to be paid for supplying the BAGS service. Indeed, there is an argument that suggests they may be better off when crowds are allowed to return as RPGTV invariably damages attendance.

The financial repercussions for ARC are more serious. They are bankrolling the difference between their contracted tracks’ income and the amount they can charge the bookies for product.

Since all the costs were already paid by the BAGS deal, the RPGTV income was ‘free money’. How much that equates to is speculation, but I would be surprised if £3.5m per year was too far out.

The other downside would surely be open racing. For those of us who believe that RPGTV coverage fluctuates between ‘night time boring BAGS’ and ‘high class televised open racing’, there are clear advantages of being broadcast.

Will a failure to appear on the screens affect open race sponsorship? Would Property 192 have sponsored the Oaks if it wasn’t televised, for example?

The loss of any TV coverage cannot be seen as a plus!

A clash of ideologies

One of the oldest beefs that greyhound racing fans have with the betting industry is about to come under scrutiny.

“We don’t need open racing. We take just as much money on an A6 graded race as we do on an open race”

That might be an over simplification of the argument, but no dyed-in-the-wool dog man hasn’t heard the claim in some form or another. Quite frankly we don’t believe it.

At one level it does have some substance. The betting shop cannon fodder might not even know the difference between and opens and graded racing. And as our recent Gambling Commission figures demonstrate, they are still more commercially important than on-line betting.

How does a Wednesday night graded card from Sunderland, compare with a televised Essex Vase meeting from Romford?

Which brings us to the Saturday nights and Towcester.

With Hove having dominated Saturdays in December, and Crayford becoming an open race player from next weekend, to be followed by Monmore (Winter Derby and Puppy Derby), Entain (formerly GVC, formerly Ladbrokes Coral) will soon be dominating the schedules.

Quite how their contract with SIS operates is a closely guarded commercial secret, though it would be astonishing if the tracks weren’t paid extra from televised meetings.

Of course, as SIS’s biggest customer, Entain can pretty much insist on it.

I have heard it said that by paying themselves, Entain get their greyhound racing for free. Though I have no figures to back up the claim.

So when Towcester stage their Blue Riband heats on Saturday January 23rd, they will be taking on Crayford with a series of minor opens, plus, unless things are changed, the penultimate Saturday night graded card from Sheffield.

A week later, the Blue Riband semis are in opposition with minor opens from Crayford and Monmore. The Blue Riband Final is on the same night as the first round of the Ladbrokes Golden Jacket.

The question is this. If SIS are compelled to swerve Towcester for the Blue Riband, how will that play out going forward?

Will they be taking a different view when the Derby trialstakes kick-in? Or the Derby itself? How will Kevin Boothby react?

What happens if ‘all the money’ and interest is focused on Towcester for three consecutive Saturdays during the Blue Riband?

What will Entain’s fellow shareholders at RPGTV make of it?

This isn’t just about Towcester. How will Betfair and Bet365 (who largely fund RPGTV between them) react if turnover falls on Monday, for example, with Nottingham’s open racing being particularly badly missed by punters.

In a nutshell – does open racing matter?

Prepare to find out!

NEXT POST
STAR SPORT
greyhound star onlineFLOYD AMPHLETTLATEST GREYHOUND NEWSTV COVERAGE TO BECOME CLEARERSHARE ON: GREYHOUND STAR — JANUARY 15, 2021There is at least one important link between the two major announcements yesterday:1) That Towcester will stage the