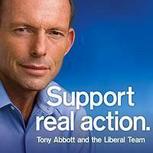 11 Feb 11 10:00
Let me say something.  I am a massive fan of Cory Bernardi.
His a young, intelligent, grounded, genuine and a modern conservative.

This bloke is the future of the Liberal Party.  Leadership material, no doubt about it.

Politically speaking, reading the musings of Cory from his website blog is a real treat for me.  He articulates my beliefs precisely.

The title of this blog piece is "The Conservative Revolution".
I couldn't help myself but share.  I'm keen for a revolution that Cory speaks of.

Can't wait to read the book, which is due out shortly.

There are three types of people in Australia.

The first of these are the Radicals that are trying to tear down our institutions and diminish our historical values because these don’t fit with their own view of how the world should function.

The majority are those who are apathetic to the societal changes going on around them until it affects them personally. This second group is characteristic of those who typically strive for a better life for themselves and their families, free of interference.

The third are the Conservatives that seek to protect and defend the structures and values that have allowed our nation to achieve the freedom and prosperity that we enjoy today.

Conservatives are the natural representatives of the aspirations of the majority and the values and structures they protect are based on principles that are under threat from the dominant ideologies of The Radicals and an increasingly secular and opportunistic society. A society in which concepts of right and wrong have been replaced with a moral relativism; where there are no absolutes – only preferences or choices.  A society where there is an excuse for everything but responsibility for nothing. A society where the wisdom of the ages is being replaced by fads and quick fixes.

That’s why we need a revolution of sorts in this country. A revolution that will restore the principles and values that have successfully guided mankind and our society since the dawn of time.

We need to restore that which is now routinely ignored in the blind pursuit of new agendas that are remarkable, not for their lack of substance, but because they are built on the economic and moral corpses of previous failure.

We need to reacquaint our citizens with the understanding that there are absolute truths that hold true in all places and at all times.

We need to make a radical departure from the growing and all-pervasive acceptance that critical and discerning moral judgment is somehow unfair and an infringement on human rights.

We need to re-establish the notion that responsibility is just as important as freedom of choice.

We need to reaffirm that the family is the most important building block in any society and that the wellbeing of children is the best investment that any society can make.

We need to recognise that our nation has a role to play in international affairs but her primary responsibility is to her citizens.

In short, we need not just any revolution, we need a conservative revolution. One that will re-establish the family, social and economic virtues that have been neglected for at least two generations, yet are as innate within the human spirit today as they ever have been.
Rate post:
0 (0 Ratings)
Share |
report
No Comments [ 430 views ]
www.betfair.com Betfair