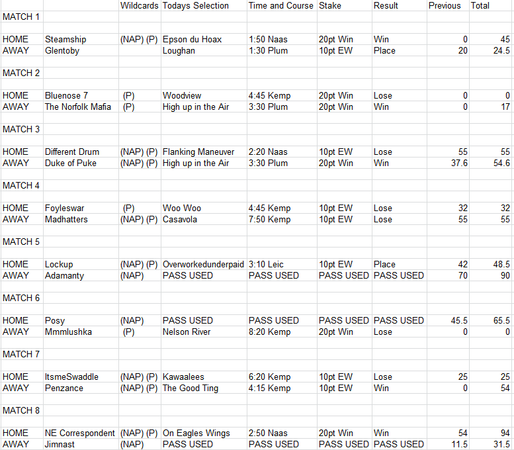 Just a quick update, in the last 3 rounds, when there is less going on, there may be no need for a daily report, it will be obvious enough to everyone what is going on! I think I will leave it 3 days at a time if possible, this seems the best way to work things!

Plenty of winners on Wed, nice tipping all. Plenty of gambles going in too, hopefully some of our money was on em, I can tell you it wasn’t any of mine though!

Steamship has been quiet for his standards but everyone that seems to be crossing the Irish Sea selection wise is finding success, that was the case here with a relatively easy winner today for the Group Stage winner Steamship, Glen replied with a placed horse that kept his tally ticking, he now trails in Match 1 however.

Match 2 is off the mark with an odds on poke going in at the famous Plumpton for TN Mafia, rumour has it hours of study went into this tip! He edges ahead in Match 2 , Bluenose can consider himself unlucky with a huge priced 2nd placed effort.

Match 3 is the closest match of all now, scores are nearly identical and Pukey was able to almost bridge the gap on leader Different Drum who only just missed out on a place of his own, his selection travelled strongly coming in but didn’t feature in the finish.

Match 4 Foyles couldn’t even find the right race time! Only joking but his selection was nowhere, he couldn’t real Madhatters in as of yet, who couldn’t capitalise later on at Kempton, nothing brewing here.

Match 5 Lockup can consider himself a tad unlucky, that race was the subject of a gamble that obliged to force Lockup’s selection into 2nd place, at least he secured the place points but Adamanty used his pass and now looks a long way away from Lockup on paper, 90 points thus far is very good going.

Match 6 also saw a Passer, that put Mmmlushka 65 points behind going into the day, his selection in the last at Kemp Nelson River didn’t win making this group a quiet affair.

Match 7 saw the host fall behind, a really well gambled The Good Ting went in for Penzance, very nice selection. I couldn’t respond with a dud each way selection and that puts Penzance 29 points clear, a handy position.

Match 8 had a winner with the only selection of the day and this match also now includes the highest points scorer thus far, On Eagles wings looked shaky to me with the amateur on up and over the last but a nice manoeuvre to grab the rail sealed the deal to bag a 2/1 victory and 40 points, Jim passed but now has it all to do in the remaining 4 days.
Pause Play • Switch to Standard View New Year Comp -DAY 4 - LAST 16
Show More