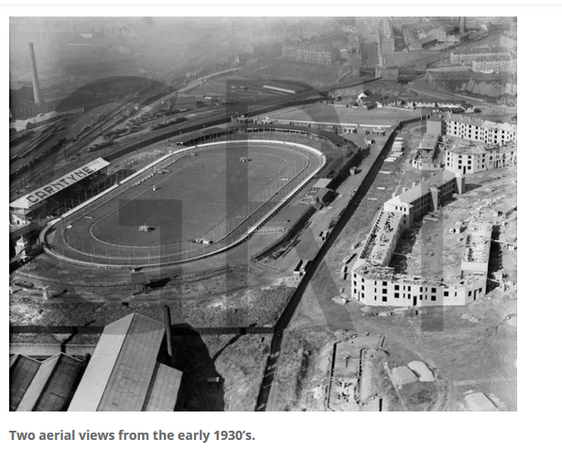 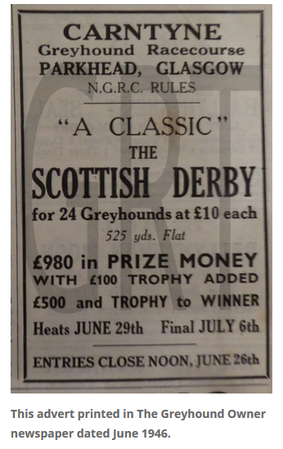 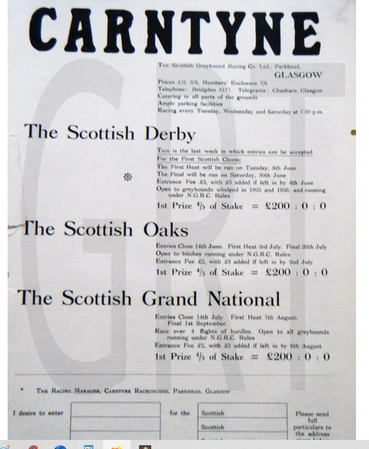 The Carntyne Greyhound Stadium in Glasgow, became the second Greyhound Racing venue to open in Scotland, after Edinburgh’s Powderhall Stadium had been the first during August 1927. The Carntyne venue was located roughly three miles east of Glasgow city centre, and less than half a mile north west of Glasgow Celtic’s football ground, in a district known as Parkhead. It lay parallel to a railway line situated on its south side, and hemmed in by Myreside Street to the north. The first sign of any sporting activities on the site was during 1913, when Harness Racing and Athletics featured, along with Amateur Football being staged later. But it was in 1927 that the Scottish Greyhound Racing Company took control of the abandoned site and transformed it into a more recognised greyhound stadium, large enough to accommodate a crowd of around 40,000. Due to a week’s delay of its opening, the greyhound company gambled on staging a double header meeting for its opening day. The official first meeting for greyhound racing took place during a Saturday afternoon of the 1st of October 1927, with more than 6,000 racegoers attending, witnessing a greyhound called Aisy Tune winning the first event. The following night’s meeting was run under the new track lighting system for the first time, which attracted a further 10,000 crowd, with both meetings being staged under rules similar to those of the NGRC. Attendances at the following meetings had proved the sport had caught the imagination of the public, and soon Carntyne was staging five meetings per week. Dirt Track Speedway was introduced in 1928, with an unfamiliar pear shaped track being constructed within the infield of the greyhound track. The Speedway promoters ran their first meeting on the 25th of May, in front of meagre 600 onlookers, with another meeting being held the following week, again attracting a very slim crowd. But also the irregular shape of the track did not go down well with competitors either, leaving the promoters to abandon ideas regarding any more meetings. Speedway reappeared in 1930, after £6,000 had been invested on a new track, but after three meeting a dispute between the stadium owners and promoters ended things once again. Attempts were made to promote Speedway once more during the late 1940’s, but nothing materialised from these efforts. A top Boxing bought featured also, with 35,000 fans attending a top British challenger fight one evening during August 1928. It was during 1928 that Scotland’s top classic event began, with the introduction of the Scottish Greyhound Derby, an event that would be staged at Carntyne virtually every year right up until 1970. Strangely enough the Scottish Derby failed to be get recognised as a classic event until 1950, although it was quite an achievement by trainers if they could take the English, Scottish and Welsh Derby scalps in one year. Further details of the Scottish Derby is described later in this chapter, the reason is that it became part of the demise of Carntyne. Another Scottish classic compotition was the St Mungo Cup first run in 1936, and became another event in time to be switched to either Powderhall or Shawfield once it had been announced regarding the venue’s uncertain future. Six dog race events were contested over distances of 300, 495 and 525 yards, with the greyhounds chasing a McKee Scott outside cable type hare. Junior football club Bridgeton Waverley began playing home matches there in 1960, but the extra revenue generated ceased after the club folded in 1962. More trouble times lay ahead as attendances began to falter considerably, the numbers being affected by the introduction of legalised betting shops, who were now allowed to do business on Britain’s high streets during 1961. Efforts were made to regenerate revenue, firstly in 1962, when a casino was opened underneath the main stand, along with the new grandstand bar. In 1963 Green Shield stamps were offered to lure patrons, who by now were clearly deserting them, and also a golfing range which operated on the infield of the greyhound track during the Summer months. But the late 1960’s proved more of an uncertain time for Carntyne, after the stadium was now controlled by the Greyhound Racing Association Trust. It was during 1969 that alarm bells began to be heard after the Scottish Derby was cancelled due the fact that it had received just 14 entrants for that year’s competition. Due to the lack of interest, the promoters found themselves having no other option than to scrap the idea. Fortunately, the following year experienced a better response, with a greyhound called Brilane Clipper winning the last ever Scottish Derby at Carntyne in 1970. But the event never took place in 1971 as it soon became clear that the venue had been sold for redevelopment. The Scottish Derby was transferred to Shawfield, and became more recognised as a classic event by 1972, and that is how it remained except for a couple of absences were it was staged at Edinburgh’s Powderhall Stadium. Sadly, Greyhound Racing ceased altogether in May 1972, and it came as no surprise when the stadium became demolished soon after. But strangely enough the site was never built on for more than forty years, not even any outbuildings linking them to the marked out football pitch that became its only use during the following years. Today, the site is covered with new housing with street names  having a prefix of Penicuik before them, even though it is only recently that they have been built. A landmark at the old rear entrance along Duke Street has gone too, with the word “CARNTYNE” once engraved in stone above a walkway that used to feed the stadium.
Pause Play • Switch to Standard View Remembering Carntyne
Show More