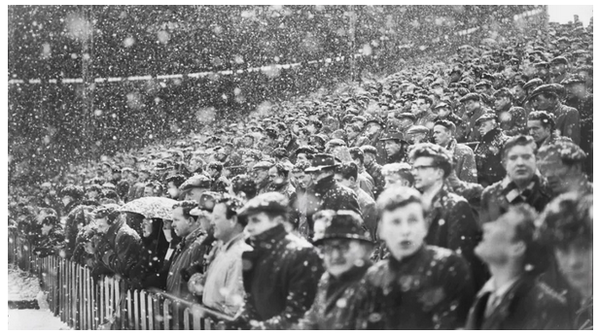 As a youngster in the 1950s Christmas Day morning meant a trip to Upton Park but it seems a very long time ago now.

For football fans, the Christmas period serves up a real festive feast, with fixtures stuffed into the calendar like sage and onion into a turkey’s nether regions. Christmas Day, however, is a football-free zone, with supporters left to sit indoors and endure the Queen’s speech, cracker jokes and kisses from elderly relatives.

This wasn’t always the case, though – up until the 1950s, football was traditionally played on Christmas Day.

This made a lot of sense, particularly in the early years. Christmas Day was a rare public holiday, and football was one of the few entertainments available. In the days before television, it wasn’t possible to slump on the sofa in front of the EastEnders Christmas special, so folk wrapped up in new hats and scarves from Santa Claus and went out to watch football instead. There would be a full programme of fixtures on Christmas Day and, usually, another full programme on Boxing Day. In the Victorian era, when many of the festive traditions we enjoy today were introduced, football was very much a part of Christmas.

As far as white Christmases go, the Christmas of 1956 was one of the whitest on record. “Officials of Football League clubs are not among those who dream of a white Christmas,” commented The Guardian. However, although bad weather – plus a petrol shortage – kept many spectators at home, all of the Christmas Day fixtures went ahead. 1950s footballers were a hardy breed, and games were played in three inches of snow and driving winds. There was only one submission to the elements – Coventry’s match at Newport was abandoned due to a snowstorm, and the return match on Boxing Day was postponed. The Guardian subsequently referred to the unfortunate Sky Blues as “the club that Santa Claus forgot”.

Christmas Day 1957 was the last with a full league programme. The arrival of floodlights and evening games had removed the need for fixtures to be squeezed into public holidays, and many fans were preferring to stay at home with their families on Christmas Day. In the First Division on December 25, 1957, Blackpool beat Leicester 5-1, Manchester United beat Luton 3-0, and Sheffield Wednesday and Preston drew 4-4. Chelsea beat Portsmouth 7-4, with 17-year-old Jimmy Greaves scoring four for the Blues.
In 1958 there were only three First Division matches played on December 25, and in 1959 just one. The last English League match played on Christmas Day was Blackpool versus Blackburn in 1965. A crowd of 21,000 turned up to see Blackpool win 4-2. In Scotland, where Christmas Day football wasn’t as big a tradition as it was in England, football was only played when December 25 happened to be a Saturday. The last matches played were Clydebank versus St Mirren (2-2) and Alloa versus Cowdenbeath (2-1) in 1976.
Pause Play • Switch to Standard View Remembering Christmas Day Football
Show More

Report Angoose • December 25, 2020 5:38 PM GMT
Standing on the terraces, outside toilets, Elvis at Number 1, full employment, and no VAR.
Nostalgia aint what it used to be

Standing on the terraces, outside toilets, Elvis at Number 1, full employment, and no VAR.Nostalgia aint what it used to be

Report chelsea girl • December 26, 2020 11:55 AM GMT
In the Chelsea match Dereck Dougan scored a hat-trick and finished
on the losing side!

In the Chelsea match Dereck Dougan scored a hat-trick and finishedon the losing side!
Post Your Reply Text Format: Table: Smilies: