The majority of the field would make for a good wide open tv tourney.

Includes 2 BDO World Champions. Several England Internationals (how many can you name)? And youth players of the future.

nice to see all the faces are there

I had a most impressive group of players to keep in order.

In the photo you'll notice my head has been "tampered" with?
For some bizarre reason it came out like this!

It clearly shows Colin Osborne (with a shrunken head) and Neil, (the organiser)in a stamp?

From left to right - Myself?

The photo is still "pending approval" since this afternoon!!!

Last 16:
On my board i chalked the match between Kev Dowling v Jelle Klaasen.
Kev went 4-0 up, Klaasen missed several darts at doubles to make it 4-2 before Kev wrapped it up to win 5-1 and progress to the quarter final.

Interesting to see both averages of the semi finals pretty much franked in the final.

In years to come people will only remember the winner - Rightly so.

Having chalked all of Bunting's 5 group matches it could easily have been oh so different. He was somewhat lucky to get out of the group! A slow start against James Richardson saw him turned over 5-1. "Ruthless" was most impressive in beating Bunting, yet in his 2nd match he produced an indifferent performance, against my old county colleague Trevor Frost. "Frosty" played an absolute blinder himself to win 5-1 (including a 134 c/o). This is how the group continued to pan out with all 6 players either winning 2 or 3 games and losing 2 or 3 games.

No one knew the outcome of the group until it was announced from the top table. Out of Bowles, Bunting, Amos, and Richardson, the least deserving/most lucky to qualify would be Bunting. It went down to the final match of the group and the players were asking me??? I had no idea and thought Paul deserved to go through on his overall play.

Unknown to us it transpires the result between Paul Amos v James Richardson would decide the fate of 4 players still chasing 2 spots.

When James broke Paul to lead 4-3, a hold of throw would have see him top the group. Bowles would have finished runner up and Bunting ko'd!
Paul played a great leg to break back and level in 12/13 darts, then won the decider.

When the group winner and runner up were announced both Paul and James were gutted. Guess who simply smiled!? lol

The obvious hard luck stories followed. Namely from Paul who had several darts to win one match and ended up losing it (not the plot). His next match he beat Bunting 5-3. More broken violin strings need replacing.

Got to hand it to Bunting, from looking far from impressive, and dead and buried in the group stage, to scraping through, thanks mainly to his last match 5-1 win, and results going his way. To pulling his finger out in the K.O. stages then lifting the title. To top it all off, he was in my group

The cream certainly rose to the top! Well done The Bullet!
Warwickshire Invitational Classic 2014I had a most impressive group of players to keep in order.In the photo you'll notice my head has been "tampered" with?For some bizarre reason it came out like this! It clearly shows Colin Osborne (with a shrunken

Those of us who follow darts in the midlands have known about Jamie for years.
I was surprised he didn't jump the bdo ship this season and join the pdc ranks.
A very level headed player of great potential (many similar types tried and drifted into darting oblivion). Now a regular England International (of the 12 man team) and a player to be respected on the oche. Has a good team of mates and local businessmen backing behind him which enables him to travel/play in the exotic bdo darting locations like Romania and Czech Republic. Picking up valuable ranking points on most if not all the events he plays in. An automatic place at Lakeside looks more likely than not. Now it's a case of pushing on and continuing to climb the ranking table. Every year there's a "springer/rag" in the market. Could do a lot worse than have a poke on Jamie in the outrights.

I was expecting 50/1 at least!
Be 16's if the high street parasites read this

Step forward Rob Walker (07:14) who moves is just as the golden girl gives the "Leeds Assassin" an arm massage

Photo finally approved! My group from left to right: (don't ask why a stamp appeared in my place) 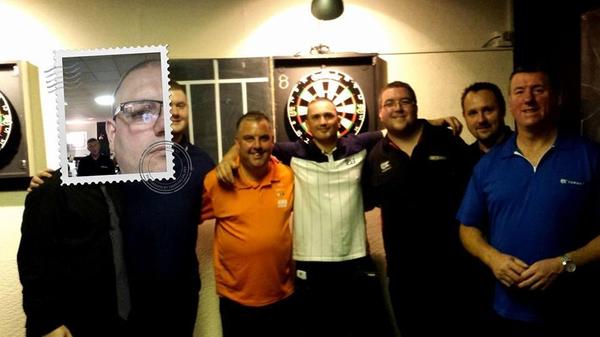 Report DartsnBooze • September 30, 2014 9:07 AM BST
Across the city on the same evening (as above event) was a darts exhibition was a most novel name:
"Lock Stock and Three Smoking Arrows"

I have it on good authority that Adrian Lewis was in top form throughout and duly blitzed the field. Dave Chisnall was on the end of a proper beating as Lewis' winning legs included 10, 11, 10

Across the city on the same evening (as above event) was a darts exhibition was a most novel name:"Lock Stock and Three Smoking Arrows"Adrain Lewis, Dave Chisnall, Bobby George, Colin Lloyd, Steve Beaton, Justin Pipe, Kevin Painter, and Wayne Mardle.

The Warwickshire Invitational Classic hosts another quality field with pdc, bdo, county players/lesser lights away from the tv screen. Team Mac is once again strongly represented, though their top man Kim Huybrechts won't be playing in it this year. I left it too late to get some items signed by the man himself, to be framed as a christmas pressie for my girl, his number 1 fan. Oh bugger!

I'll be on marking duty again, just the 105 legs to mark in the group stage for starters!

48 players in 8 groups of 6 players. All 7 legs to be played in each group match with 2 points for a win, legs difference counting if any grouped ties. Top 2 from each group qualifying for the last 16, where a new draw will then take place. All players numbered in no particular order for the group draw...

all the faces again

I also marked this one. Another match of high standard with
Ricky winning the deciding leg after both missed matched doubles.

Ricky was 5-2 up and blew chances to wrap it up. Jamie produced a great sequence of quality legs to win 6-5